It won’t take long in a google search to find all kinds of things said about pregnancy fitness. Today I’m going to bust several of these pregnancy fitness myths so you can have your healthiest pregnancy without all the overwhelm.

I’m going right in for it today. Strengthening the pelvic floor for an easier labor is talked about A LOT. But it’s not true. At least not entirely.

Obviously, we want to have a pelvic floor that is balanced. Strong when it should be and relaxed when it should be. You’re pelvic floor shouldn’t be ON at all times. Most of the time and especially when pushing a baby through the birth canal it should be OFF. Why do fitness professionals insist that the pelvic floor is the thing pushing the baby out? That’s your uterus’ job! And it’s VERY good at it with no help from kegels.

I was so worried with my first that my pelvic floor wasn’t strong enough to have the natural delivery I wanted. After a few google searches of “why am I have incontinence during pregnancy” that led me to believe I hadn’t been doing enough kegels or pelvic floor strengthening exercises. Back then, a mere five years ago, I didn’t understand how all this pregnancy stuff worked.

Guess what? I had the natural labor I wanted because my uterus pushed that baby out for me! The pelvic floor is mostly a shock absorber as well as what holds all those organs in place. Psstt. Did you know men have a pelvic floor too? Yep, everyone has a pelvic floor. Though it has a super important job to do, it’s job definitely isn’t to push a baby out.

And this time around, on my fourth pregnancy, I have had no leaking issues whatsoever. I don’t even wake up in the middle of the night to go! Everyone is different but I believe this is because I’ve left the pelvic floor specific exercises alone and focused on overall strength by including squats, lunges, hip thrusts and other accessory work in my fitness regime. Something I wasn’t able to do with my last two pregnancy from severe symphysis pubis dysfunction and severe sacroiliac joint pain!

pregnancy fitness myth #2: if you weren’t doing it before pregnancy don’t start it during pregnancy

This is a myth, to a degree. If you weren’t powerlifting before pregnancy now is not the time to start. But, if you were inactive before pregnancy and want the benefits of a fit one, then by all means start doing something.

I talk a lot around here about how you don’t have to have an all or nothing mindset about fitness. Starting weightlifting and walking during pregnancy is a great way to enjoy each trimester more and to have an easier postpartum healing time.

This is one of the pregnancy fitness myths I hate most. It makes women feel like they have to be “stuck” where they were physically until after they’ve had the baby. Being active during pregnancy has so many benefits you would miss out on if you listened to this advice.

I believed this myth and it had me feeling like such a goner having had three back to back pregnancies. I thought I would never feel like my movement loving self again (more about this story here).

So please heed my advice, if you have been cleared by your doctor to exercise, DO IT! And if you would like to have a coach who truly wants to see you succeed and feel your best, I would love to help.

Need help with your pregnancy or postpartum fitness routine? Reach out to me here.

Pin it for later!

Your pregnant body is NOT BROKEN.

Women are strong, especially through the beginning stages of motherhood and beyond! Mother’s have to be strong for their babies.

This is actually a really funny myth if you think about it. In third world countries, there are pregnant mama’s carrying a toddler on their backs and a jar of water on their heads while they trek five miles back to their village.

And here in America we’re telling women not to lift their groceries out of the cart and into their motor vehicle to drive back home.

Now, I understand not every pregnant woman is a low risk pregnancy where lifting heavy weight is advisable. But the majority are and like I’ve already stated it’s advisable for low risk women to lift as heavy as they can.

A note about lifting heavy

Lifting heavy is relative. What I considered heavy two years ago wouldn’t be heavy to me today. You may be just starting out on this fitness thing and 5-10lb weights are truly a challenge. I applaud you for trying! Truly, I do! It makes me want to do a happy dance when people tell me they’ve upped their weights or are doing things they never thought they could. The only way to get better and stronger is to keep lifting those weights. It’s cliche but it’s true…practice makes perfect! Just like your new baby is going to find it difficult to hold his or her head up, eventually they will. Before you know it you’ll be watching that same baby climb the jungle gym at the playground. Mama, you are no different. You can become more fit and agile. God made the human body pretty resilient and adaptable!

You can even gain muscle and lose fat during pregnancy. It’s all a matter of being consistent in the gym (or at home) and being mindful of what you are eating. Personally, this fourth time around, I have gone from bicep curling 15lb weights to 25lb weights and squatting 70lb to 125lb. Those are only two examples of exercises I’ve gone up in weights with. I say this to encourage you!!! If you want to lift weight then you should.

Pregnancy fitness myth #4: you shouldn’t do any core work during pregnancy

Many women fear that doing ab work will increase their odds of diastasis recti but this isn’t the case.

Core work is part of a balanced workout regimen for expecting moms! Sure, you won’t be doing planks or crazy core workouts but there are some essential core movements to be focusing on during pregnancy.

Some of these exercises include:

Don’t let these pregnancy fitness myths fool you. Having a strong core is essential to decrease back pain in all stages of life, not just pregnancy!

Did you believe any of these pregnancy fitness myths?

Tell me in the comments below what crazy thing you were told during pregnancy, fitness related or not!

Previous Post: « Healthy Chicken Salad Recipe
Next Post: How to Prep for a Smooth Postpartum Recovery: Tips from a Fourth Time Mom » 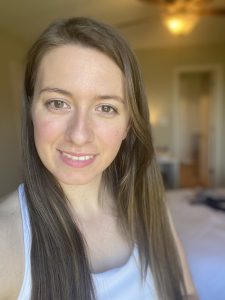 Hi, I’m Ellyse- believer, wife, mom, and YOUR go to trainer for all stages of motherhood!

I’m an anatomy nerd and have a passion for helping women succeed in all areas of motherhood, especially their health and fitness!

Stick around to find the most researched back fitness routines to help you on your fitness journey!

Sign up for a FREE 7 Day Guide to a Fitter Mama!

Join a community of women looking to become the best versions of themselves through faith and fitness! I'll send you weekly encouragement, recipes, and fitness tips.